A Lot of Attention:

The project Clean Peptide Technology by Sulfotools GmbH im among 100 innovative awardees of the German competition "Excellent locations in the land of ideas" 2018. Within the topic of the year, "Connecting worlds - strengthening cohesion", the project shows how the joy of experimentation, curiosity and courage to rethink can lead to forward-looking innovations in the field of chemistry. The initiative "Germany - Land of Ideas" and Deutsche Bank have been organizing the innovation competition since 13 years.
An independent jury selected the Clean Peptide Technology from nearly 1,500 submitted applications. 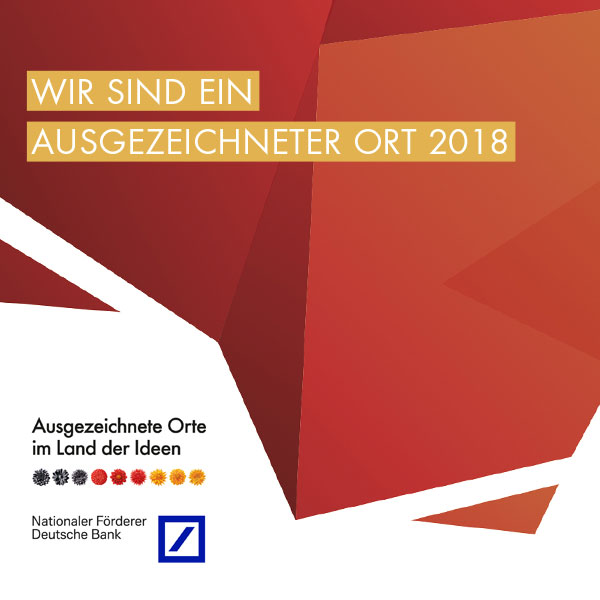 04 May 2018
Sulfotools gets quality seal "Innovative through reseach"

Sulfotools was awarded with the quality seal "Innovative through research" for its research activties by the Stifterverband für Deutsche Wissenschaft. The Stifterverband acknowledges with this seal research companies for their special responsibility for state and society.

22 November 2016
Sulfotools receives the approval for "INVEST-Zuschuss für Wagniskapital" from the Federal Ministry for Economic Affairs and Energy (BMWi). 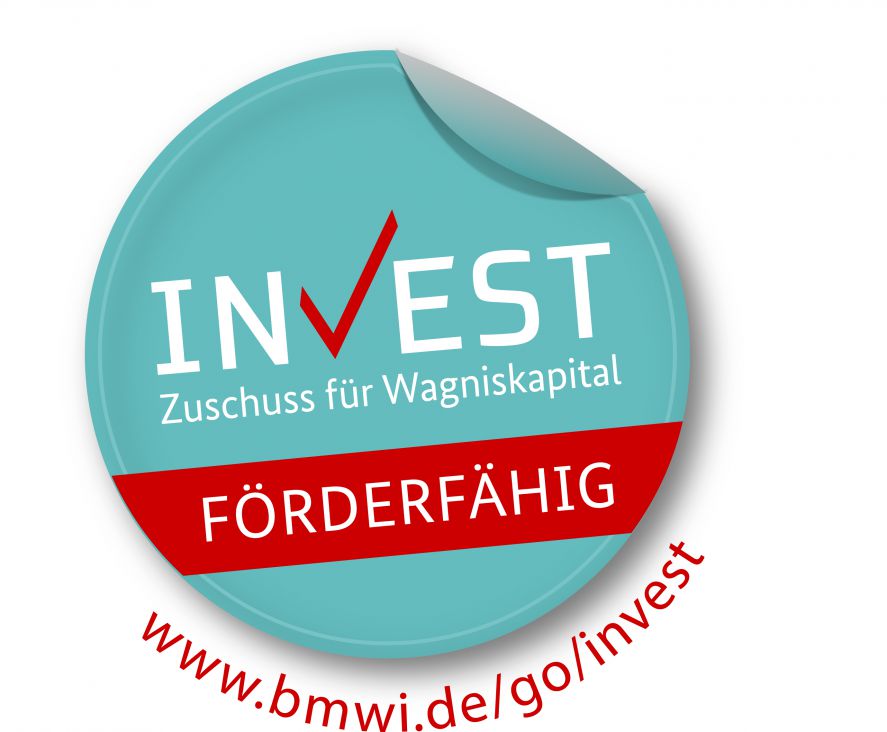 8 January 2016
Sulfotools among the Top 50 start-up companies of 2015
The online platform fuer-gruender.de chooses Sulfotools as one of the 50 most successful start-ups of the competition year 2015. The ranking is based on the evaluation of all award winners among 145 German founder competitions: 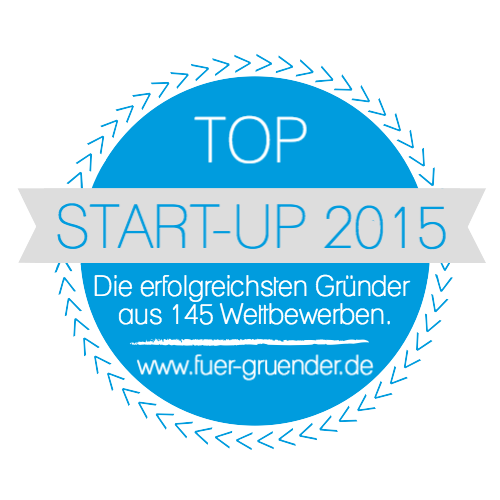 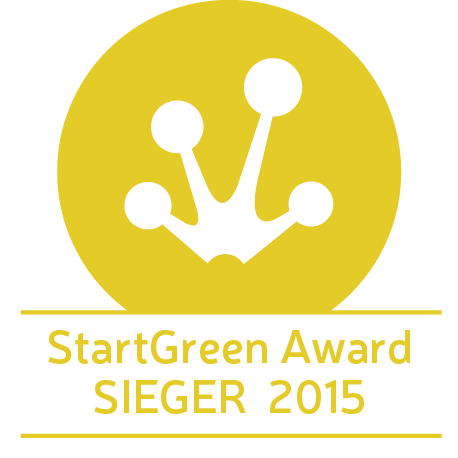 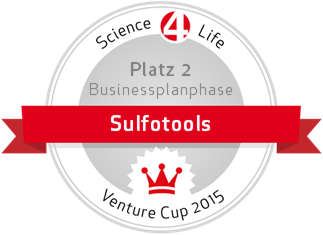 12 March 2015
Sulfotools among the winners of the concept phase of the Science4Life Venture Cup 2015
The business concept of Sulfotools is honored with € 1,000 for being one of the ten best teams in Germany. 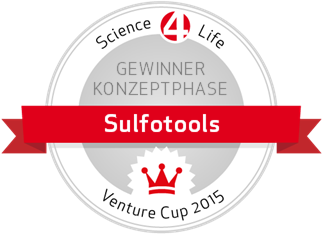 Article
Green politics meets green chemistry
On Friday, August 17, 2018 On Friday, August 17, 2018, Daniela Wagner, Member of the Bundestag, and Philip Krämer, city council member (direct candidate for constituency 50) from the local Bündnis´/Die Grünen visited Sulfotools GmbH to get an idea of the current needs and challenges of the start-up. In the presence of the complete team, Dr. Christina Uth introduced the company. Sulfotools GmbH has developed a resource-saving, environmentally friendly process for the green production of peptides, with cost savings of up to 50% compared to the state of the art. Sulfotools Clean Peptide Technology allows the user to replace environmentally harmful organic solvents with water during the manufacturing process, thus combining sustainability with cost optimization. (Peptides are small biomolecules used as active ingredients in a broad range of products, e.g. as therapeutics, in cosmetics or in food supplements.) The company was founded in March 2016 and has been funded by the EXIST-Forschungstransfer II programme of the Federal Ministry of Economics and Energy (BMWi) since the beginning of September 2017. The short presentation was followed by a lively discussion about the challenges and requirements of chemical start-ups, as well as a guided tour through the laboratory.

Sulfotools in local German newspaper Darmstädter Echo
In an extensive company profile the local newspaper Darmstädter Echo reports about Sulfotools.
Article
Sulfotools in the German magazine Laborjournal
The magazine Laborjournal reports in its June issue about Sulfotools.
Article
Sulfotools in the ACHEMA Newsroom
Within the scope of the ACHEMA founders award 2018, the ACHEMA Newsroom presents the 8 finalists, among them Sulfotools.
Article
Sulfotools in interview on Finanzen.de
Within the scope of the forthcoming award ceremony of the "Innovationspreises für Klima und Umwelt 2017 (IKU)" finanzen.de reports about Sulfotools as one of the finalists.
Article
Sulfotools among the 15 nominees for the environmental award IKU 2017
From 133 applicants renowned jury selected the 15 best projects for the German "Innovationspreis für Klima und Umwelt 2017 (IKU)". This price is awarded for the sixth time by the "Bundesverband der Deutschen Industrie (BDI)" and the Federal Ministry for Environment, Natur conservation and Nuclear Safety (BMUB) in five different categories, as well as for the second time for the special category „Innovation and biological diversity".
Article
Sulfotools among the finalists for the Green Alley Award 2017
Sulfotools and 5 other start-ups were nominated for the final of the pan-Europe competition Green Alley Award 2017. This prize is annually awarded to start-ups for their contribution to a circular economy and environmental protection.

Article
Interview
Video
Sulfotools among the applicants of the "Innovationspreis für Klima und Umwelt 2017"
The applicants for the "Deutschen Innovationspreis für Klima und Umwelt (IKU) 2017" are introduced in the newsroom. Every 2 years this price, awarded by the Federal Ministry for Federal Ministry for the Environment, Nature Conservation and Nuclear Safety and the Federation of German Industry, is assigned to new, innovative contributions towards climate and environmental protection.
Article
Tweet
Interview with Sulfotools on Startup Valley
Startup Valley interviewed the founders of Sulfotools about their Clean Peptide Technology.
Article
Sulfotools among the applicants for the "GreenTec Awards 2018"
"Newsgreen" introduces the applicants for the "GreenTec Awards (GTA) 2018".
Article
Sulfotools at the Merck Innovation Center blog
At its blog the Merck Innovation Center reports about the" Big Bang Moments" of former participants of the accelerator program.
Article
Federal Minister of Economy Brigitte Zypries visits Sulfotools
On Friday, 08. September 2017, Federal Minister of Economy Brigitte Zypries visited the start-up Sulfotools.
Article
Tweet 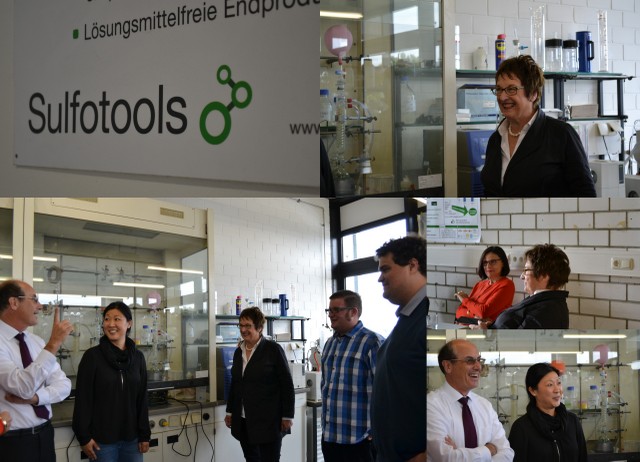 Flyer
Article
Sulfotools is shortlisted at the Emerging Technologies Competition 2017 of the Royal Society of Chemistry (RSC).

Sulfotools in the special edition "Berlin Valley Spezial"
The German start-up magazine Berlin Valley reports in its special issue 2017 about the start-up scene in Frankfurt/Rhein-Main and introduces a few companies from that area, among them Sulfotools.

http://www.focus.de/politik/ausland/diese-frau-will-die-deutsche-chemie-industrie-veraendern-start-ups-der-deutschen-chemie-und-pharma-industrie_id_6453450.html
Sulfotools in Hessen Biotech News
The technology magazine "Hessen Biotech News" from the Hessian Ministry for Economy, Energy, Transport and State Development reports in the issue 01/2016 in an extensive article about Sulfotools.

https://www.darmstadt.ihk.de/produktmarken/Beraten-und-informieren/gruendung/Technologieorientierte_Gruendung/Qualitaetslabel_HIGHEST_Start-up/2539240
http://www.tu-darmstadt.de/vorbeischauen/aktuell/einzelansicht_153152.de.jspSulfotools in the magazine Uni ON of AOK
The magazine Uni On of the German health insurance company AOK Rheinland-Pfalz/Saarland reports in the March issue 2016 about Sulfotools.

ArticleSulfotools in "Laborpraxis"
In the scope of the special section "Green Analytics", the magazine "Laborpraxis" reports about the founders of Sulfotools and their Clean Peptide Technology.

http://www.laborpraxis.vogel.de/bioanalytik-pharmaanalytik/articles/539294/From chemist to entrepreneur
The magazine CHEManager reports on successful chemistry and pharma start-ups and how the initiative Science4Life supports scientists on their way to become entrepreneurs.

http://www.chemanager-online.com/themen/management/vom-chemiker-zum-unternehmerSulfotools at the Analytica 2016
From 10 May through 13 May 2016, Sulfotools is represented at the joint participation booth of the State of Hesse at the Analytica trade fair in Munich. Come visit us in hall A3 booth 320.

http://www.wiwo.de/technologie/green/biz/umweltfreundlich-gegen-falten-peptide-produktion-soll-ohne-chemie-auskommen/13553366.htmlStartGreen Network
The online information and networking portal by the StartGreen-Network presents Sulfotools to the green founder scene in Germany:

https://start-green.net/aktuelles/nachrichten/so-gewinnt-man-den-startgreen-award/
A portrait on chemie.de: Peptide synthesis without organic solvents
On the occasion of winning the Science4Life Venture Cup during the concept phase, chemie.de presents the Sulfotools technology in a short portrait:

http://www.chemie.de/news/153056/peptidsynthese-ohne-organische-loesungsmittel.htmlEco-friendly peptide synthesis becomes a business idea
Right before Sulfotools was ready to launch its own company, this article gave insights into the context in which the idea for this technology was developed and how the business concept emerged: